G13 gallery is pleased to announce its upcoming group exhibition which comprised of four printmaking practitioners namely Johari Said, Shahrul Jamili, Samsudin Wahab and Faizal Suhif. As opposed to the traditional way of printmaking, the concept of the exhibition is to reintroduce an innovative take on printmaking art and its implementation as far as the process goes.

The term ‘GO BLOCK’ can be described as a testament to the innovation of alternative printmaking which urges it practitioners to not only resort to the traditional method of doing prints. The phrase can also be seen as a cheer to celebrate alternative printmaking. GO BLOCK is an effort by a few printmakers who strives to push the development of its discipline further to the next level. Moreover, GO BLOCK is more than just a movement; it is an idea which is fluid in nature especially in terms of its movement and dynamism.

The show will be open to public from 20th October until 3rd November.

Do Not Forget - Installation of 7 mri brain scan

Do Not Forget - Installation of 7 mri brain scan 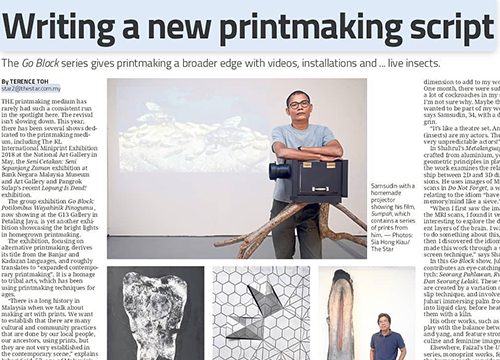 Go Block: The Expanded Contemporary Printmaking, a Group Showcase was listing in The Star Malaysia, Star2 on October 2018

View Publication Details
Back To Top